skip to main | skip to sidebar

Back in the Saddle!

LOL! It feels like forever since I have exercised and it was only since Saturday, but it just wasn't what I had planned for this week....don'tcha just hate when that happens? I really wanted to workout yesterday, but ended up having to work through my lunch instead and then with my brother's basketball game last night, there was no time.

So, today I went to the gym, did the elliptical and feel like a real person again! I also wandered around more than I usually do and found the rowing machines. My plan, now that the weather is turning to crap, is that I will rotate between running, elliptical, bike and rowing. I think that should give me enough variety for a while to keep me motivated to get to the gym no less than 4 days a week. I would love to say 5, but with Christmas so close, I really need to give myself at least 1 lunch a week that I can use to run errands and shop.

Jack did so amazing and I am so stinking proud of him! There were so many people and afterwards you wouldn't believe how many of them came up to congratulate him and pat his back/shake his hand. I think he really felt good about it!

When they started the race, everyone just took off in a mad dash. Thankfully, I didn't get sucked into the crowd, but Jack nearly did! I grabbed the hood of his sweatshirt and pulled him back and he was PISSED at me! LOL But believe me, by a mile down the road he was glad I didn't let him go off crazy like that ;) Our splits were around 10:30/mile most of the time, which was pretty much where I wanted us to stay. I didn't want to run too much faster than that with him there and really just wanted to run as much of it as we could. We didn't even walk at all until right around the 3-mile or 3.25-mile mark and then only for maybe 30 seconds if that.

The last mile got tough for Jack and he really wanted to stop and walk when we were about 1/4 of a mile from the end. I pushed him on and kept telling him that we were almost there! There were two teeny little hills to go over and then down the road to the finish. He did so great and kept pushing on. I thought he was going to breakdown in tears that last little leg, and he told me later that he almost did :( Poor kid. Am I the meanest mom ever, or what?

We will definitely be running again!
Posted by Lori at 1:09 PM 2 comments:

It's here. The 4-mile trail run is tomorrow. It's do or die and I have a feeling it may be the latter of the two :(

I ran Monday, Wednesday and Thursday of this week and have not had one run that was easy on me. I don't know what the deal is all of a sudden...weather changes, the increased mileage, or what ??? I don't know, but Thursday's was the worst by far. Major shin splints. I used to have wicked shin splints in high school, but since taking up running, have had absolutely no problems at all. Until, of course, two days before I am supposed to run a race :( Seriously! Not fair at all. I felt like they were cracking into a zillion pieces. I iced them after my run on Thanksgiving and again after we got home and I got all the kids to bed last night. They were a little sore tonight, but definitely better. I am going to find some stretches and try to get them stretched out really well before the run tomorrow. I just really don't want to end up walking the last half of the run. I will be so disappointed and I know that Jack will too.

Today's run wasn't as good as the last few. I wonder why some days they are easy and some days they just aren't. I did 4 miles, but didn't run them all, which is disappointing to me. I ran the first three and then walked abut 4 tenths of a mile and then finished up running the rest. My time was around 35 minutes, not bad, but not as good as I have been doing. My saving grace, however, was seeing that I still burned 475 calories. That number will make me run all day long! I am such a calorie whore :P

Work was crazy today and the kids were equally nuts tonight, so I am so so glad I got that run in. It was seriously all that saved my sanity on this day ;)
Posted by Lori at 11:30 PM 1 comment:

Thank goodness for the 7 year old that can talk me down!

LMAO! Okay, so I am much calmer about the race now. Jack put my mind at ease ;) I figure if he isn't worried, than why should I be. I am just really glad that I am taking him with me because then I can't be nervous since I will have to put on my "brave face" for him! Haha! So, now I am just really excited about it. I seriously can't wait and wish it were this weekend! My only concern is the weather and not for my sake, but his. I want to make sure that he doesn't get himself sick or anything because his mom decided to take up an outdoor activity and drag him along in 30 degree temps - at least I hope it is at least 30 degrees!

No running or gym time today. I decided to skip out of work early for a haircut and to go get new glasses. It was worth it. I'll have to put a pic of me with my new do and specs up after I take a pic tomorrow :) I got quite the deal, too. Since my brother is the lab manager at the glasses place, I am getting two pairs of glasses from him for Christmas! Can't beat it!

I just put the registration for the FOLEPI 4 mile race in the mail.

Will it always be this hard?

Don't get me wrong...I am loving running, loving it. I also know that I am pretty darn new to this whole running way of life. But I just want to know...will there ever be a time when the mileage that I want to run that day doesn't seem hard? Will there ever be a time when I can just jump up and run 5 miles (or whatever my current happy place with mileage is) and not think about how much further I have the whole time?

My point of no return seems to be right about the mile and a half mark. That is usually when I really want to stop for a minute and walk, but if I push through it, I have been hitting my goal. After that, my breathing seems to regulate and get much easier. Then, the only thing that I contend with is my legs and only if they are tired and have been run on recently.

I did another 4 miles today. I came in just short of 30 minutes, which was my goal (I wanted to see if Sunday was just a fluke ;)) But the big motivation number, as always for me, was the 512 calories burned! That just freaking rocks! 500 calories in half an hour!!! No way! Makes me want to run everywhere!
Posted by Lori at 2:01 PM 2 comments:

Javamom finally talked me into starting a blog....thanks Lisa ;)

I started running at the end of September, I think. My whole purpose was to find an exercise that I enjoyed and would actually do to lose this baby weight from #3 and to shape up. Running seems like a no-brainer since it burns crazy calories and I am all about that, but I have NEVER been a runner! I mean, NEVER! I hated running all the way back to jr. high track..lol! Surprisingly, however, I am LOVING this! I mean, seriously. I can't wait to get out there and run and am constantly trying to go further than I did previously.

Other than just the fact that I am watching those calories burn off, I love the time I get by myself. Being a single mom with three kids, I am not very familiar with time to myself and this is like heaven to me! 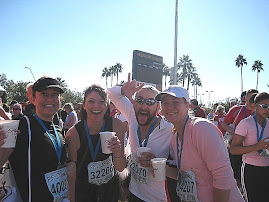 Places I Want To Run!

Places I Have Run!

Lori
When I began this blog I was a single mom with three kids. Running started as a way to get back into shape after #3, but since the loss of my youngest it has also evolved into a quest to understand the path my life has chosen for me.